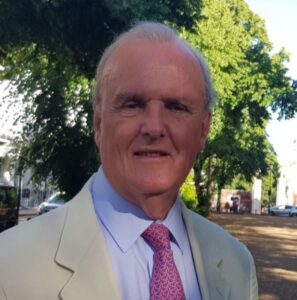 We all know that there is a lot of plastic getting into the environment as litter – and this is the reason why there is so much concern about plastic.

We also know that the world has changed, and COVID has taught us that plastic packaging and personal protective equipment are essential for protecting us from attack by deadly microbes.

We have to destroy the microbes before they get into the human body, and my company’s scientists have found a way to make plastic so that it will destroy 99.9% of them within one hour of coming into contact with it.

Governments are trying to improve waste-management systems, but they all know that a lot of plastic will still get into the environment, from which it cannot be collected for recycling, composting, or anything else.

But what is so special about plastic litter which has caused people to want to restrict it? Quite simply because it can lie or float around for many decades –and become a burden for future generations.

What can be done about this?

Fortunately the scientists who developed plastics found that if they added a catalyst at the point of manufacture, they could make the plastic convert by oxidation into biodegradable materials at the end of its useful life– and they called this process oxo-biodegradation.

They also discovered that this process will work anywhere in the environment in the presence of oxygen, without any need to collect it and take it to a composting facility. Sunlight and heat will accelerate the process but they are not essential.

It is not designed to biodegrade in landfill, because biodegradation of anything in anaerobic conditions generates methane.

Our scientists realised that this technology would be very useful for protecting the environment against plastic pollution, and they persuaded us to bring it to market.  They proved to us that the technology had been validated by scientific studies over more than 40 years – and it has been revalidated this year at Queen Mary University, London, and at the LOMIC ocean laboratory in France.

To our surprise, marketing this technology has been like pushing a boulder uphill, because there has been a relentless PR and lobbying campaign against it. Our opponents must have spent many millions on this by now in their own commercial interests, and this has been very bad for the environment.

The lobbyists used to say that oxo plastic contains heavy-metals and Bisphenol A, but they no longer say that.  What they are now saying is that it simply creates microplastics, (although the Ellen MacArthur Foundation are no longer saying that) but the lobbyists have persuaded the EU to impose a ban.

However, the EU Directive does not apply in the UK or anywhere else outside the EU, and we received a letter on 29th October from the Rt. Hon. Theresa Villiers MP, who said:

“I am aware that “oxo-degradable” plastic will be banned in the EU as from July 2021, but I am concerned that having commenced the process required by REACH before any substance can be banned, the EU did not complete the process and imposed the ban even though their own experts (the European Chemicals Agency) advised that they are not convinced that microplastics are formed.

I am therefore writing to say that as a former Secretary of State for the Environment I see no justification for banning oxo-BIOdegradable plastic.  In fact I consider it highly desirable that everyday plastics should be made so that they will biodegrade much more quickly if they get into the open environment and will not lie or float around for decades.”