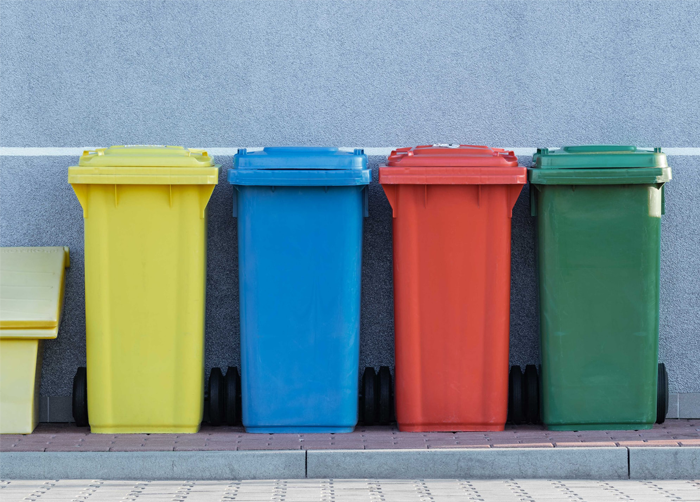 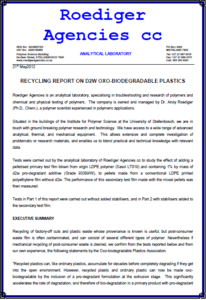 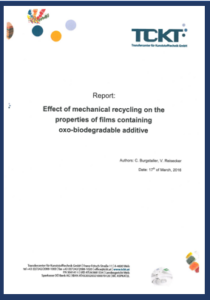 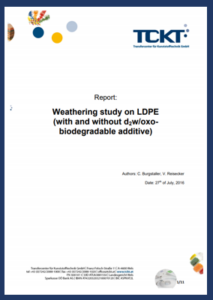 Whilst almost all pre-consumer waste (eg factory offcuts) is recycled or reused, almost all
post-consumer waste plastic is not. There are reasons for this, one of which is that a great
deal of water is needed to wash post-consumer waste to make it useable, so the amount of
waste-water generated is enormous. Moreover, this process leaves large quantities of dirty
solid waste, including biological waste that is hazardous and highly undesirable.

The recycling charity RECOUP says (“Recyclability by Design”) that “where plastic products
are particularly lightweight and contaminated with other materials, the energy and resources
used in a recycling process may be more than those required for producing new plastics.
In such cases recycling may not be the most environmentally sound option.”

By contrast, PET bottles are worth collecting for recycling, and bio
technology is not suitable for use in their manufacture.

Most of the plastic that does get reprocessed is larger items e.g. plastic drinks bottles have
a 56% rate. (link) Minimal amounts of plastic bags (or “film”) are processed, and RECOUP
data shows that the collection rate for household plastic film is only 5%.(link)

According to US National Public Radio (March 31, 2020)  “For decades, Americans have been
sorting their trash believing that most plastic could be recycled, but the truth is, the vast
majority of all plastic produced can’t be or won’t be recycled. In a joint investigation, NPR
and the PBS series “Frontline” found that oil and gas companies — the makers of plastic —
have known that fact all along, even as they were telling the American public the opposite.

Starting in the late 1980s, the plastics industry spent tens of millions of dollars promoting
recycling through ads, recycling projects and public relations, telling people plastic could be
and should be recycled. But their own internal records dating back to the 1970s show that
industry officials long knew that recycling plastic on a large scale was unlikely to ever be
economically viable.

A top official, who led SPI for more than a decade, says the strategy to push recycling was
simple: “The feeling was the plastics industry was under fire, we had to do what it takes to
take the heat off, because we want to continue to make plastic products,” he says. “If the
public thinks that recycling is working, then they’re not going to be as concerned about the
environment.”

They could have solved this problem by making plastic products with
biodegradable technology so that they would become biodegradable
and would be recycled back into nature by bacteria and fungi. Instead they
ignored (and even opposed) this technology, which has been proven since
the 1970s, and they spent millions of dollars trying to pull the wool over
the eyes of the consumers.

The Guardian (UK) reported on 17th August 2019 that recycling was “really a complete myth”
(link) In Tennessee USA (link)  “The reality of plastics recycling? It’s pretty much already dead.
In 2015, the U.S. recycled about 9 percent of its plastic waste, and since then the number has
dropped even lower.

The best way to deal with contaminated post-consumer waste plastic is to send it to modern,
non-polluting, thermal recycling facilities and to use the energy released from the plastic to
generate electricity, instead of wasting it by sending to landfill.

Recycling is sometimes used as an objection to biodegradable plastic, on the basis that it
would contaminate a post-consumer waste stream, but this is clearly inapplicable if the
relevant waste plastic is not going to be mechanically recycled.

A March 2020 Report by the Institute of Environmental Engineering, Zurich, for the Swiss
Federal Office for the Environment found that:

“Conventional plastics may contain pro-oxidant additives that were added for different
intended functionalities.  Moura et al. (1997) described that colorants in general can act
as pro-oxidants. If they partake in the creation of radicals or reactive oxygen species,
such as singlet oxygen (1Δg), they can trigger photo-degradation of the polymer matrix.”
“Conventional plastic products (n = 23) were found to regularly contain Fe, Ba, Ti, Zn, Cu
and V. Some individual conventional plastic bag samples also contained Cr and Pb” “Thus,
a potentially much higher number of plastics on the market may match the current legal
definition of degradable plastics without being advertised or intended as such,
i.e. unintentional ODP.”

Users of recyclate cannot therefore assume that the recyclate does not
contain pro-oxidants, but this does not matter if the recyclate is to be
used for short-life products such as carrier bags, garbage sacks, or
general packaging, where biodegradability is actually desirable.

With regard to long-life products, the Austrian specialist laboratory TCKT said in para.1 of its
March 2016 report. (link) that “long-life films should be made with virgin polymer, or be
stabilized to deal with loss of properties caused by the recycling process, whether or not
any pro-degradant additive is present. Such stabilization would effectively neutralize the
effect of any pro-degradant additive.”

Although biodegradable plastic is used for low-value items which are not worth recycling,
the experts in Austria (TCKT Report para. 4) and South Africa (Roediger Report May 2012
page 3 (link) have confirmed that if anyone wished to recycle them, they may be recycled
without any significant detriment to the newly formed recycled product.

This accords with the experience of OPA members who have recycled
many thousands of tons of biodegradable plastic over the past 20
years without any adverse effects.

Having considered all the issues mentioned above policymakers have to decide whether
recycling is a sufficient reason to continue to allow ordinary plastic to be used for short-life
packaging which could get into the open environment and lie or float around for many decades.