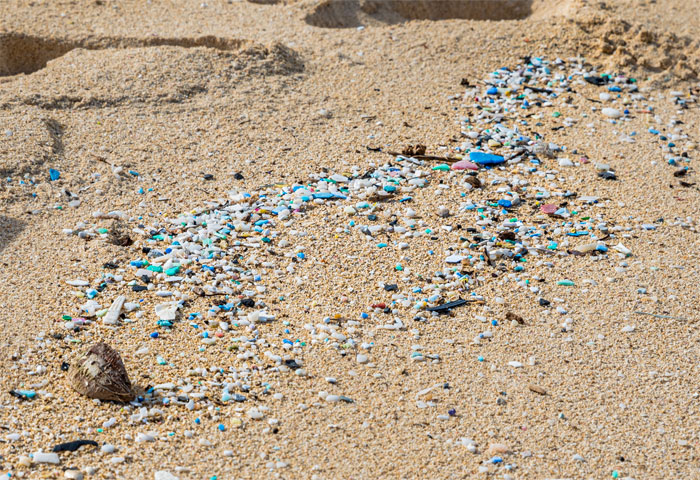 Microplastics are seen today as the main problem with plastics.  They are tiny pieces of plastic, which are being found on land, in the sea, and now even in the air we breathe.  Conditions in the environment cause the degradation of conventional plastic articles[1] leading to embrittlement and fragmentation in as little as 4-8 weeks[2] particularly when exposed to sunlight, on land or when floating on the ocean.

The problem is that although these plastics are fragmenting, their molecular-weight remains too high for biodegradation, so they persist in the environment, getting smaller and smaller – resulting in persistent particulate litter which takes many decades to degrade enough to permit biodegradation.1,8  Also, fragmented conventional polymers are more likely to be occluded from sunlight by burial in topsoil or to be susceptible to biofouling over time, resulting in a reduced rate of degradation.3

If plastic products are made with biodegradable technology, and get into the open environment intentionally or by accident, the molecular-weight of the plastic will reduce much more quickly and it will become a waxy substance which is no longer a plastic. It will then have become a source of nutrition for naturally-occurring micro-organisms.

Professor Ignacy Jakubowicz, one of the world’s leading polymer scientists has described the process as follows: “The degradation process is not only a fragmentation, but is an entire change of the material from a high molecular weight polymer, to monomeric and oligomeric fragments, and from hydrocarbon molecules to oxygen-containing molecules which can be bioassimilated.”  .https://www.biodeg.org/wp-content/uploads/2020/05/Reply-to-Ellen-MacArthur-Foundation-from-Prof-Ignacy-Jakubowicz-21-8-17.pdf

The prodegradant catalyst in the d2w masterbatch accelerates oxidative degradation, but also – critically – removes the dependence of this process on sunlight so that, unlike conventional plastics or photo-degradable plastics, degradation will continue in darkness until biodegradability[3] is achieved.

Biodegradable plastic was patented fifty years ago by the scientists who had themselves created plastics and who realised that the durability which they had achieved could actually be a problem.  If their invention had been widely adopted there would be no ocean garbage patches today, but instead the plastics industry were allowed to continue to make conventional plastic, which started to accumulate in the oceans and has now become a serious problem.  Nevertheless it is not too late – If the invention is widely adopted today the accumulation of plastic in the oceans will be reduced and eventually reversed.

Foremost among these scientists was Professor Gerald Scott, Professor of Chemistry at Aston University. He was the holder of several patents for the technology, and was later the Chief Scientific Adviser to the biodegradable Plastics Association (OPA). He published the results of his work in many scientific publications including “Polymers and the Environment” – (Royal Society of Chemistry 1999) and “Degradable Polymers: Principles and Applications”- (Kluwer Academic Publishers 2002).

Professor Scott and other polymer scientists made it clear in their published work that biodegradable plastic will degrade and then biodegrade in the open environment very much more quickly than ordinary plastic, leaving no persistent fragments and no toxicity. Polymer scientists were themselves the authors of the standards for biodegradable plastics (ASTM D6954 and BS 8472) and it is not correct for anyone to say that there is insufficient evidence, or that there are no relevant standards.

In 2018 the scientific evidence was reviewed by a distinguished former deputy judge of the High Court in England.  https://www.biodeg.org/uk-judge-find-the-case-for-oxo-biodegradable-plastic-proven/     This has been confirmed by later research published by Queen Mary University London in February 2020. https://www.biodeg.org/wp-content/uploads/2020/05/published-report-11.2.20-1.pdf

The most recent and most important evidence is the OXOMAR report.   On 4th September 2020 scientists at the Laboratoire d’Océanographie Microbienne (LOMIC) reported on a four-year study (the OXOMAR project) sponsored by the French government, of biodegradable plastics in the marine environment. Their final report, citing six earlier published reports, was published in March 2021 https://anr.fr/Project-ANR-16-CE34-0007

The purpose of OXOMAR was to investigate whether biodegradable plastics will fully biodegrade in a reasonable time in the marine environment, and to investigate whether biodegradable plastic or its by-products create any toxicity in the marine environment. It involved the complementary expertise of four independent laboratories (CNEP, LOMIC, ICCF, and IFREMER).

They found congruent results from their multidisciplinary approach that clearly shows that biodegradable plastics biodegrade in seawater and do so with a significantly higher efficiency than conventional plastics.

However, no government in the western world has a policy for dealing with plastic waste which has escaped into the open environment,  and cannot therefore fit into a circular economy.  Their blind spot is that despite their best efforts a significant amount of plastic will continue to get into the open environment for the foreseeable future, which cannot be collected for recycling, composting, or anything else.

Biodegradable technology is specifically designed to deal with this problem. It will degrade in landfill if oxygen is present and will then biodegrade, but if it has been sent to landfill it has been responsibly disposed of and is no longer a problem.  It is not designed for composting, and ASTM D6400 and European Standard EN13432 are not therefore relevant.  It can be recycled if collected during its useful life. See https://www.biodeg.org/subjects-of-interest/recycling-2/

The plastics industry could have addressed this environmental problem, to the great benefit of themselves and the environment, by making everyday plastic products with biodegradable technology so that they would become biodegradable much more quickly and would be recycled back into nature by bacteria and fungi.  However, instead of engaging with the experts in the biodegradable plastics industry and seeking to understand it better and to explain it to their customers and to the public they have continued to make conventional plastic.

Governments have concentrated on redesign and recycling, but it must be obvious to them that this cannot deal with the plastic which escapes into the open environment from which it cannot be collected. Nor can the plastics marketed as compostable deal with the problem, for they have to be collected and taken for composting. In fact, the OPA does not consider that there is any useful role for plastics in composting  (see https://www.biodeg.org/subjects-of-interest/composting/