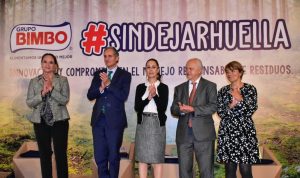 At an important event in Mexico City on 20th August 2019, Daniel Servitje, President and CEO of Grupo Bimbo, announced the progress of its successful d2w biodegradable packaging program with technology partner and supplier Symphony Environmental Technologies Plc. The d2w biodegradable packaging program was first launched in Mexico City in 2008 as part of a structured program to improve waste management, and control the life of packaging. This has resulted in 100% of Grupo Bimbo’s Mexican packaging suitable for this technology being made biodegradable and recyclable.

This program has been enhanced by the reduction of plastics due to packaging gauge decrease, together with an estimated 97% recycling achievement in Mexican plants. . The event showed for the first time new packaging with Symphony’s d2w brand. The Company also announced the launching of its first compostable packaging, which can be disposed of together with organic waste.

Grupo Bimbo is the largest baking company in the world and a major producer of snack foods. It has sales of $US 15.1 billion, in 32 countries, with 3.2 million points of sale. Grupo Bimbo has a strong commitment to the communities in which it has a presence, as well as to environmental care, which today is grouped into 4 main axes: reduction of carbon footprint, reduction of water footprint, integral waste management, and natural capital.

Grupo Bimbo are not obliged by legislation to use biodegradable packaging, but as an environmentally-responsible company they decided that it was the right thing to do, being aware of worldwide concerns about the environment.  Grupo Bimbo’s packaging is part of a program that will reduce the impact of plastic pollution in the environment without causing any reduction in recycling or product safety.

Michael Laurier, CEO of Symphony, said “This is a tremendous vote of confidence in Symphony and its d2w technology by a very large company, who have been using and testing d2w for eleven years. Not only are they satisfied with it but they are now expanding its use and associating Symphony’s brand with their own. It has been a challenge and a privilege to work with Grupo Bimbo for so many years and to help them make sure that their packaging meets the highest technical and environmental standards. We have invested heavily in scientific and technical excellence to make this happen and are proud to partner with one of the world’s most successful and responsible groups of companies.”

Both Symphony and Grupo Bimbo are committed to a circular economy, but packaging which escapes into the open environment cannot be collected for recycling, composting or anything else. However, if it is made with d2w technology it will become biodegradable and be recycled back into nature by naturally-occurring micro-organisms.

The event took place at the JW Marriott, Polanco in Mexico City, and speakers were: